The day I met the Queen

I’m no fan of monarchies. I’m Australian and I voted (on the losing side) of the 1999 referendum to become a republic. Still, I think that even for many republicans, the Queen surpassed politics. She was a professional and a seemingly permanent fixture of our lives who cared about her responsibilities, and she certainly put the work in.

With that in mind, a brief story about the day I met her during the grand opening of CUBRIC in summer 2016.

First, the lead up. For weeks beforehand, we had Men in Black wandering the corridors, opening random doors and asking random questions. Yes, I work here. No, that’s a cleaner’s closet. No I’m not going to murder the monarch. Chill out guys, killing famous visitors reduces our funding rates.

We also had to deal with the Queen’s private secretary who I remember as an absurdly pompous character. I was already permanently sleep deprived from having a 2 year-old and a 6 month-old, and I had nothing left to give to the pretentious trivialities and condescending micromanagement of a "Royal opening". I stopped attending the endless "rehearsals".

The Queen’s chief of police was a nice guy though. One day I was sitting in my office and he dropped in for a chat. Over the course of a general conversation about life and family, he told me that the Queen was particularly looking forward to this visit because it was about science, which she loved, and she was getting bored of art galleries.

As part of the visit we had to empty one of our testing labs and convert it into a room containing nothing but a chair and a phone and a bottle of water, just in case she needed to make an urgent call. The table had to be in a certain position in the room. The phone had to be in a certain position on the table, the water on the left. We rolled our eyes at the fussiness of it all.

Then the actual visit. My job was to explain the technique of transcranial magnetic stimulation, or TMS, which involves delivering electromagnetic pulses to the brain in living people. I was the director of this particular method in the centre, so I made myself the guinea pig and the brilliant and steady-handed Jemma Sedgmond (my then lab manager) had the job of zapping my brain.

We’d done this many times before in student lectures so in a lot of ways it was just another day at the office, and in every other way it was the strangest thing we had ever done.

We were doing the demo in the control room of our 7T MRI scanner, the flagship technology of the centre. In came the Queen and Prince Philip.

For some reason Philip immediately started faffing about with some storage lockers in the corner while various dignitaries humoured him and tried to gently steer him back on track.

The Queen, however, was having none of that. In a way that seemed quite practised, she ignored Philip’s rummaging and instead made a bee line for the key stuff. She knew what she was doing.

From memory this photo was taken while Philip had his head in a locker. There’s my blurry bald head at the back. In the foreground is our chief physicist John Evans and our (then) director of fMRI, Richard Wise. There’s a photo somewhere of Jemma and me with the TMS but I can’t find it now. 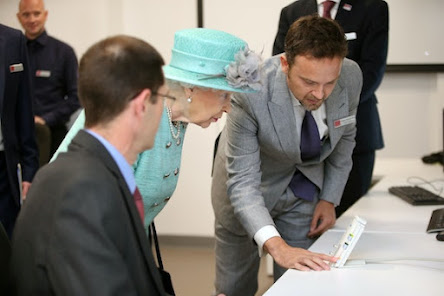 We eventually got to the TMS demo. There I was talking the Queen and Prince Philip through live electromagnetic stimulation of my brain. Jemma administered TMS to my right and left motor cortex, and I explained the contractions of my hands and arms in real time, how they arose, how the technique could be applied in other ways, and how it could help us understand brain function in health and disease.

I’m virtually certain this is the one and only time someone from the Royal family will see a scientist talk them through live electrical stimulation of their own brain.

Sidebar: sometimes watching TMS makes people feel sick. I once had a student in the front row of a lecture pull a whitey on me, and it was in the back of my mind that this could happen again. Imagine the nightmare of paperwork if the Queen fainted in front of us. But she only recoiled ever so slightly as my arms jumped around.

After we’d finished the demo, Philip mumbled something unintelligible and the Queen asked a bunch of very good questions. She had an easy and inquisitive way about her, and as I was answering her, it occurred to me that all the pomposity and ceremony of her visit seemed to be more about the people around her feeling important, and less to do with her as a person.

All she wanted to do was talk about the science. Why was the effect of TMS contralateral? (that is, you stimulate right side of the brain but see the effect on the left side of the body). How could you use this to understand the effects of stroke or brain injury? Could this help the brain adapt after damage? Yes ma'am (as in ham, not ma'am as in palm). Thank you pompous private secretary for helping me remember that particular triviality.

Then after weeks of lead up, it was over. It was an intensely weird experience, but like Janeway says to Harry Kim in Star Trek Voyager, "We're Starfleet officers. Weird is part of the job."

RIP HMQ, a woman with possibly the weirdest job of all.

Posted by Chris Chambers at 10:02 No comments:

Each of us has a part to play in combatting the COVID-19 pandemic, including journals and Registered Reports (RRs).

For those unfamiliar with RRs, they are a form of empirical article offered by more than 300 journals in which study proposals are peer reviewed and pre-accepted before research is undertaken. This article type offers a powerful tool for advancing research on COVID-19 by reducing publication bias and reporting bias in the growing evidence base.

To maximise accessibility of the call, all article processing charges for these submissions are automatically waived, and to ensure that high quality protocols can be implemented as swiftly as possibly, the journal will strive to complete initial Stage 1 review within 7 days of receiving a submission.

This form of rapid review for RRs has never been attempted, and for it to succeed we need your help.

To reviewers: If you are willing to review a Stage 1 RR in your field of expertise within 24-48 hours of accepting a review request, then please complete this online form. You don't need to be a virologist or epidemiologist -- research in a wide range of fields is relevant to COVID-19, including maths, statistics, psychology and the social sciences. All expert reviewers are welcome, from PhD students to professors.

To authors: To accelerate handling of submissions, we encourage you to complete your Stage 1 RR using this online template which will help ensure clear linking of the research question, hypotheses, analysis plans and prospective interpretation. We recognise that not all parts of the template will be relevant for all fields, but as a minimum please ensure that your manuscript includes the design planner in Section 9 of the template. Full guidelines for RRs at Royal Society Open Science can be found here. Please mention COVID-19 prominently in your Stage 1 manuscript title and/or cover letter to assist the journal administrative team in expediting your submission.

Further updates to this initiative will be reported on my blog, on my twitter feed, or on the Royal Society publishing blog.

** UPDATE 25 March: We have issued our first Stage 1 in-principle acceptance for this initiative at Royal Society Open Science.

** UPDATE 8 April: We have issued our second Stage 1 in-principle accepance for this initiative at Royal Society Open Science. It is also the first example of an accepted RR in chemistry.

** UPDATE 15 April: We have issued our third Stage 1 in-principle acceptance, and the first example of an accepted RR in immunology/microbiology.

** UPDATE 30 April: We have accepted our first completed Stage 2 submission (with results). The rapid response network is also approaching 800 reviewers.

** UPDATE 1 May: We have issued our fourth Stage 1 in-principle acceptance, which is also the first example of an accepted RR in viral bioinformatics.

** UPDATE 18 May: We have issued our fifth Stage 1 in-principle acceptance

** UPDATE 27 May: We have accepted our second completed Stage 2 submission (with results). The rapid response network is now approaching 850 reviewers.

** UPDATE 9 June: We have issued our seventh Stage 1 in-principle acceptance

** UPDATE: 27 September: We have published our third completed Stage 2 submission (with results). The rapid response nework is now approaching 900 reviewers.

** UPDATE: 8 October: We have published our fourth completed Stage 2 submission (with results).

** UPDATE: 21 October: We have published our fifth completed Stage 2 submission (with results).

** UPDATE: 10 February 2021: We have published our sixth completed Stage 2 submission (with results).

** UPDATE 29 September 2021: We have published our seventh completed Stage 2 submission (with results).

** UPDATE 25 November 2021: We have published our eighth completed Stage 2 submission (with results).