The Geek Manifesto and my open letter to Jenny Willott MP 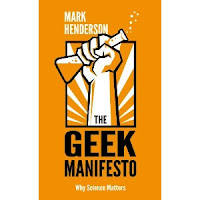 Mark Henderson’s Geek Manifesto is a remarkable book. It succeeds in articulating what many scientists and other STEM professionals have believed for years: that Westminster's blatant disregard for science and evidence underlies many failures of our socio-political system. The book trumpets this message with flair and eloquence. As I was reading it, I found myself repeatedly thinking – or even shouting – yeah! But the book does more than just point out where things have gone wrong. It also provides a recipe for change.

When it comes to politics, I'm definitely toward the cynical end of the scale. Yet Geek Manifesto achieved something for me that no other book about science and politics has been able to. It lifted me out of my state of sedentary cynicism (and consequent inaction), and convinced me to do something about it.

The book succeeded at changing my mind because it showed – using evidence – that the political system is the way it is precisely because of inaction by me and my fellow scientists. The paradox is deftly unravelled.

Dave Watts has already initiated a drive via PledgeBank to purchase a copy of the book for every sitting MP. I signed it last week but, to be honest, patience is not one of my virtues. So today I posted a copy of the book to my local MP, Jenny Willott (Lib Dems), along with the open letter below. I've never written to an MP before, let alone sent a present!

I may be a political cynic, but actually I think we’re fortunate to have Jenny as an MP. I’m especially glad not to be living in Bosworth, for instance. One of the reasons I respect Jenny is that she continued to oppose the tuition fee increase after Nick Clegg sold his soul. And even more importantly, she also has a good record of rational pro-science views, with the odd exception of endorsing homeopathy. Perhaps she will be willing to explain that in her reply.

My letter is more than just a note to say “here’s a book, hope you like it”. I'm also using this opportunity to try something that Mark suggests at the end of Geek Manifesto: geeks need to get involved. So I’ve offered my services to Jenny as a “constituent scientist”. Perhaps this is naïve, and I don't yet know what it will involve, but let's see where it leads. It's an idea in progress, and it will be a travesty if the Geek Manifesto is but a flash in the pan. Some concerted action is needed by scientists to get our message across in a constructive way. And what better way than to help our MPs in the tricky business of developing evidence-based policy?

If I offer my expertise in isolation, my influence will be small. But if other scientists get involved too then we may be able to achieve something significant here. So please join in!

I’m not saying science has all the answers, but it has a lot to contribute to politics. If the Geek Manifesto convinced me of one thing, it’s that scientists aren’t doing nearly enough to see that potential realised.

** Update 12/6: we have initiated a call to send a copy of the Geek Manifesto to each member of the National Assembly for Wales. Please help us by signing the pledge **

My open letter to Jenny Willott

I am a psychologist and neuroscientist at Cardiff University, and a member of your borough constituency. I am writing to enquire regarding your positions on a number of science and evidence-based policy issues, and to offer my services in a capacity that might be loosely referred to as a “constituent scientist”.

First, please find enclosed a copy of a new book by Mark Henderson, Head of Communications at the Wellcome Trust, titled “The Geek Manifesto: Why Science Matters”. I hope you will enjoy it as much as I did.

Henderson’s book laments the undervalued role of science in British politics, and I personally found it quite depressing in places. For many MPs, science has become a tool to be exploited when it supports a predetermined policy position, and an inconvenience to be distorted or discarded when it does not. As Henderson puts it, the cynical quest for policy-based evidence has trumped the desperate need for evidence-based policy.

Viewed through the lens of science, the world of politics can appear irrational, even mercurial. Yet Henderson’s book has led to me to an unsettling realisation. The current state of affairs is, in fact, not the fault of MPs. It is my fault. Like many professionals in the STEM community, I have accepted that science and evidence have little to no place in Westminster.

But this view is wrong-headed. It disconnects scientists from government decision-making and surrenders an influence that could have significant socio-political benefits. Furthermore, it creates a vacuum that is eagerly filled by lobby groups – many of which are as skilled in public relations as they are at cherry picking.

So my main purpose in writing to you – and publishing this letter on my blog – is to let you know that I have changed my position. I have been inspired to speak up, and I hope more STEM professionals will do the same.

At the outset, I would be interested to learn more about your current views on a number of science-related policy issues. From the website skeptical-voter.org, I can see that you respect science; in the past you have expressed views consistent with evidence for MMR vaccination, climate change, and evolution. I also see that you support libel law reform and that you have taken part in the Royal Society’s MP-Scientist pairing scheme.

I would be grateful if you could briefly outline your current views on the following specific issues.

·      Nuclear energy as a green alternative

·      GM foods, including the experiments on GM wheat at the Rothamsted Institute

·      The current classification status of cannabis and ecstasy; and the extent to which you agreed or disagreed with the dismissal of David Nutt by the previous government

·      The teaching of intelligent design and creationism in schools

·      The indoctrination of religion in children through state-funded faith schools

·      Finally, I would be interested hear about any specific instance in which you have changed your position on a policy issue following consideration of the available evidence

An offer to help

MPs are often asked how they can better serve their constituents. But to ensure a greater role of science in democracy, I believe members of the STEM community must do more to help their MPs. I would therefore like to offer you my services, at no cost, in helping to form evidence-based views or decisions.

Precisely what this would involve is open to discussion. In general, though, I would be happy to offer my advice and assistance whenever you seek to gather or interpret scientific evidence underpinning a policy or viewpoint. My specialist scientific expertise lies in psychology and neuroscience (please see my Cardiff University website below for details), but I also have advanced training in more general areas, including statistical analysis.

Like all scientists, and I am also accustomed to dispassionately appraising arguments through logic and evidence. Indeed, one of the most widespread misconceptions about science is that it comprises a body of facts. By extension, many people (and perhaps some MPs) think of scientists as fact-accumulators with highly specialised skills that have little applicability in the real world. Yet, in reality, scientific skills are highly transferrable. What scientists learn, above all, are rational ways of asking questions and solving problems.

As a member of staff at Cardiff University I also have ready access to the peer reviewed academic literature and would be pleased to provide you with research papers and even help summarise their contents. I am also connected to a wide range of scientists in many disciplines, so even if your needs are beyond my expertise I would be happy to help facilitate contacts. If enough scientists come forward, perhaps we could form a local advisory group on STEM issues.

I genuinely believe that if more scientists offered their services to their local MPs we could positively influence British politics and society.

I look forward to your reply, which I will post on my blog: http://neurochambers.blogspot.co.uk/